Your Shield: The last 3 Surahs of the Quran 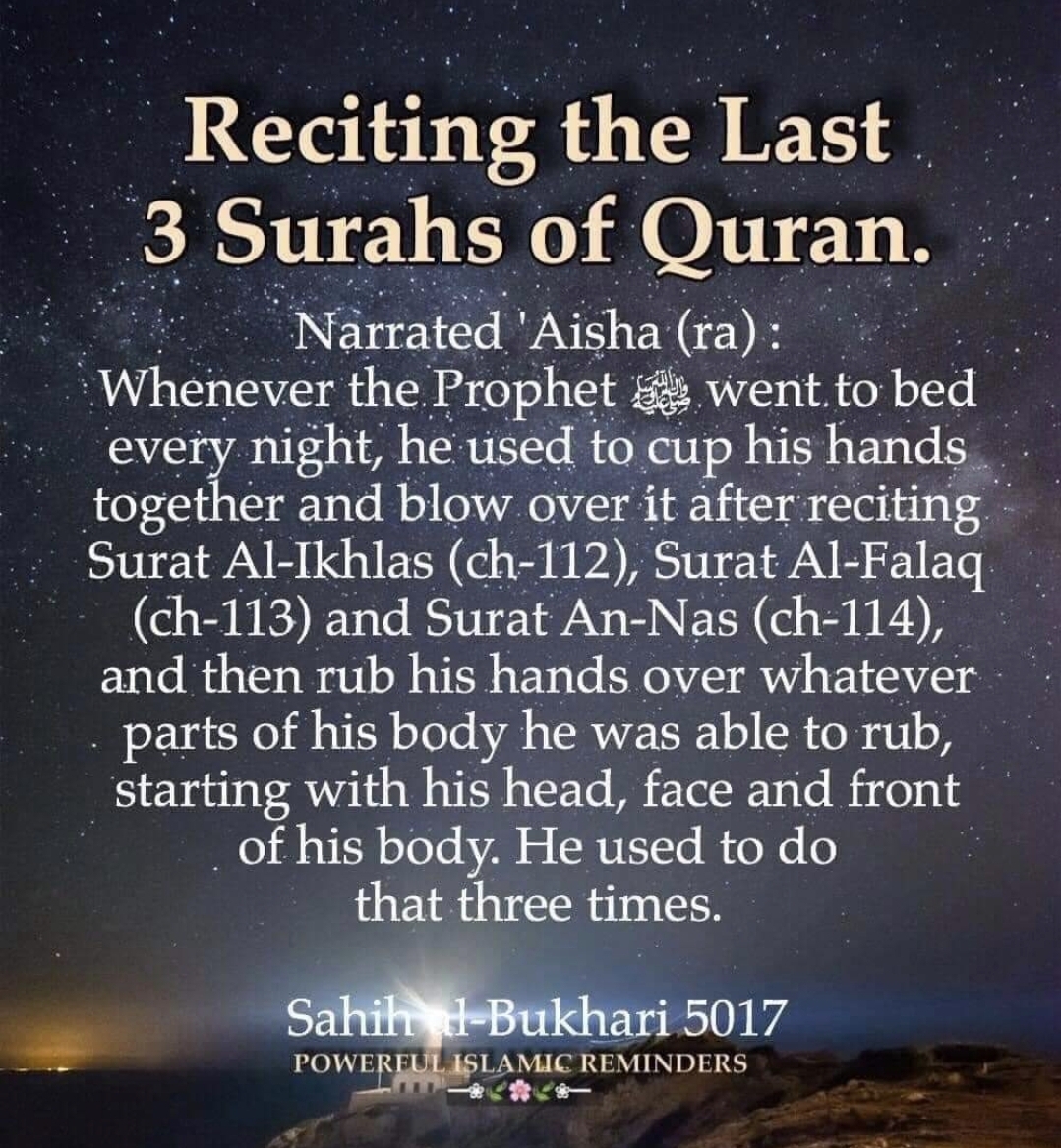 Your Shield: The last 3 Surahs of the Quran.
The last 3 Sarahs of the Quran are the strongest protection against envy, evil eye, magic and jinn. It is Sunnah to read them three times in the morning and evening, three times before going to sleep, once after every Salāh, and when one is ill.
‘These Surahs are extremely effective in repelling magic, evil eye, and the rest of the evils. The need for a slave to seek Allah’s protection with these Sūrahs is greater than his need for eating, drinking and clothes.’ (Ibnul Qayyim)
The following aḥādīth demonstrate the importance the Messenger of Allah (ﷺ) would give to these Sūrahs:
Best Ruqyah:
‘Aishah (ra) narrated that whenever the Messenger of Allah (ﷺ) would become sick, he would recite [the last 3 Sūrahs of the Quran] and then blow over his body. She says: “During his last illness from which he passed away, the Messenger of Allah ﷺ used to blow over himself. But when his sickness intensified, I used to (recite and then) blow over him using his own hands because of their blessings.” (Bukhari)
In another hadīth, she mentions that whenever anyone from his family would become ill, he (ﷺ) would blow over them with these three Sūrahs. (Muslim)
Best Protection:
Anas (ra) said: “The Messenger of Allah (ﷺ) used to seek refuge in Allah from the jinn and the human evil eye until the Mu’awwidhatayn were revealed. When they were revealed, he adopted them and abandoned everything else.” (Tirmidhī)
The Messenger (ﷺ) said: “No seeker has sought protection with anything like them.” (Abū Dāwūd)
Morning & Evening:
The Messenger (ﷺ) said: “Recite Sūrah al-Ikhlās and al-Mu’awwidhatayn (Sūrah al-Falaq and Sūrah al-Nās) 3x in the morning and the evening. It will suffice you in all respects.”
Before Sleeping:
‘Ā’ishah (ra) narrated that when the Messenger of Allah ﷺ retired to bed every night, he would hold his hands together and then blow into them. He would recite [Sūrah al-ImhlSe, Sūrah al-Falaq and Sūrah al-Nās) ] into them. Then he would wipe them over whatever he could of his body, starting with his head and face and the front of his body, and he would do that three times. (Bukhārī)
Posted by Editor at 00:41