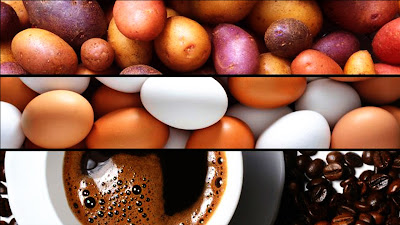 Once upon a time a daughter complained to her father that her life was miserable and that she didn’t know how she was going to make it. She was tired of fighting and struggling all the time. It seemed just as one problem was solved, another one soon followed.

Her father, a chef, took her to the kitchen. He filled three pots with water and placed each on a high fire. Once the three pots began to boil, he placed potatoes in one pot, eggs in the second pot, and ground coffee beans in the third pot.

He then let them sit and boil, without saying a word to his daughter. The daughter, moaned and impatiently waited, wondering what he was doing.

After twenty minutes he turned off the burners. He took the potatoes out of the pot and placed them in a bowl. He pulled the eggs out and placed them in a bowl.
He then ladled the coffee out and placed it in a cup. Turning to her he asked. “Daughter, what do you see?”
“Potatoes, eggs, and coffee,” she hastily replied.
“Look closer,” he said, “and touch the potatoes.” She did and noted that they were soft. He then asked her to take an egg and break it. After pulling off the shell, she observed the hard-boiled egg. Finally, he asked her to sip the coffee. Its rich aroma brought a smile to her face.
“Father, what does this mean?” she asked.

He then explained that the potatoes, the eggs and coffee beans had each faced the same adversity– the boiling water.
However, each one reacted differently.
The potato went in strong, hard, and unrelenting, but in boiling water, it became soft and weak.
The egg was fragile, with the thin outer shell protecting its liquid interior until it was put in the boiling water. Then the inside of the egg became hard.

However, the ground coffee beans were unique. After they were exposed to the boiling water, they changed the water and created something new.
“Which are you,” he asked his daughter. “When adversity knocks on your door, how do you respond? Are you a potato, an egg, or a coffee bean? “

Shake off Your Problems

A man’s favorite donkey falls into a deep well. He can’t pull it out no matter how hard he tries. He therefore decides to bury it alive.

It shakes it off and steps up. The more the load was poured, the higher it rose. By noon, the donkey was grazing in green pastures.


After much shaking off (of problems) and stepping up (learning from them), one will graze in GREEN PASTURES.
---

Everyone Has a Story in Life

“Dad, look the trees are going behind!”
Dad smiled and a young couple sitting nearby, looked at the 24 year old’s childish behavior with pity, suddenly he again exclaimed…

“Dad, look the clouds are running with us!”

The couple couldn’t resist and said to the old man…

“Why don’t you take your son to a good doctor?” The old man smiled and said…“I did and we are just coming from the hospital, my son was blind from birth, he just got his eyes today.”


Every single person on the planet has a story. Don’t judge people before you truly know them. The truth might surprise you.
---

The Miraculous Kaabah - Why Pray Towards the Kaabah?

The Miraculous Kaabah - Why Pray Towards the Kaabah? from Ahmad Sanusi Husain on Vimeo.