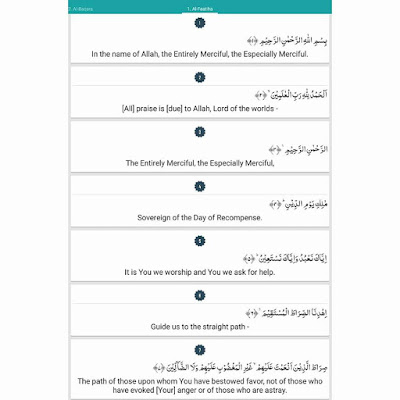 A man came to the Prophet (salAllahu alayhi wasalam), embraced Islam then returned to his people. On his way there were a group of men who had with them a mad man in iron manacles. The group said, that they heard that the travelers friend (i.e. Prophet Muhammad) had something good with him and so he exorcised the mad man with Surah al Fatiha, and he was cured. As reward they gave the traveler 100 sheep. He then returned to the Prophet and narrated the story. The Prophet asked if he did anything other than recite al-Fatiha, he said no. So the Prophet said that while these people make their livelihoods out of false incantations (i.e. worshipping false idols) the traveler earned the 100 sheep through something lawful; so he could keep the sheep.

Abu Hurairah (radiAllahu anhu) reported that when Allah’s Messenger (salAllahu alayhi wasalam) asked Ubayy ibn Ka’ab (radiAllahu anhu), "Do you want me to teach you a Surah the like of which has not been revealed in the Torah, the Injeel, the Zabur, nor the Qur'an?", and also asked what he recited in his prayers. He replied Umm-ul Qur’an (Surah Fatihah) the Prophet (salAllahu alayhi wasalam) proclaimed, 'By Him in whose dominion my soul is, nothing like it has been revealed in the Torah, the Gospel, the Psalms, or the Qur’an and it is seven of the oft-repeated verses in the Mighty Qur’an which I have been given' [at-Tirmidhi, Al-Hakim says that this hadith is Sahih on the conditions established by Imam Muslim (Tafseer Mazhari 1:30)]

Abdullah Ibn 'Abbas (radiAllahu anhu) reported that Allah’s Messenger (salAllahu alayhi wasalam) said 'Rejoice in the two lights brought to you which have not been brought to any prophet before you': al-Fatihah and the last verses of Surah al- Baqarah (2: 2854), (said an angel to the Prophet, blessings and peace be on him) [Muslim].


Ambari in his ‘Kitabur-Rad’ through his own chain of narrators has mentioned from Mujahid ibn Jabr (rahmatullahi alaih) that Iblees the accursed of Allah Ta’ala lamented on four occasions: first when he was cursed; secondly when he was cast out of Heaven to the Earth; thirdly when Muhammad (salAllahu alayhi wasalam) was given the Prophethood; fourthly when Surah Fatihah was revealed and it was revealed in Madinah. Once the Prophet (salAllahu alayhi wasalam) was traveling when he disembarked and began walking alongside a companion. He asked him, 'Shouldn't I tell you the best part of the Qur'an?' then he recited 'Alhamdu lilahi rabil alameen' (Praise be to Allah, Lord of the Worlds). [Hakim 1/560; Dhahabi]

Abu Saeed al-Khudr’i narrates that while on a journey we halted at a place. A girl came to us and said: "The chief of this tribe has been stung by a scorpion and our men are not present, is there anybody amongst you who can recite something upon him to treat him?" Then, one of our men went along with her although we did not think that he knew any such treatment. However, our friend went to the chief and recited something upon him and the chief was cured. Thereupon, the chief gave him thirty sheep and gave us all milk to drink. When he returned, we asked our friend: "Did you know anything to recite upon him to cure him?” He said: “No, I only recited Umm al-Kitab (i.e. Surah al-Fatihah) upon him.” We said that do not do anything until we reach Madinah and ask the Prophet regarding this (practice and reward-whether the sheep were lawful or not for us). Upon reaching Madinah, we narrated this to the Prophet (salAllahu alayhi wasalam), whereupon he remarked: “How did he come to know that Al-Fatihah can be used as a cure? (Rasulullah said this in astonishment) Distribute your reward amongst yourselves and allot a share for me as well. [Sahih al-Bukhari]

Ibn 'Abbas said, "While Jibril (alayhis salam) was sitting with the Prophet, he heard a sound above him and raised his head. He said, 'This is a door of heaven which has been opened today and which has never been opened before today. An angel descended from it.' He said, 'This is an angel who has descended to earth who has never descended before today.' He gave the greeting and said, 'Give the good news of two lights which you have been given and which no Prophet before you was given: the Fatiha of the Book and the end of Surah al-Baqarah (2). You will not recite a letter of them without being given it.'" [Muslim, Riyad as-Salihin by Imam an-Nawawi]


Abu Sulaiman says that once a group of Companions were in an expedition (ghazwa) when they happened to come across an epileptic person, who was unconscious. One of the Companions recited Surah Al-Fatiha and blew in his ear. The epileptic person immediately cured. When Sayyidana Muhammad (salAllahu alayhi wasalam) was informed of this, he said: “It (Surah Al-Fatiha) is “The Mother of the Qur'an” (Umm al-Qur'an) and is a cure for every disease.” [This narration has been recorded by Ath-Thua’lbi from Abu Sulaiman, who narrated it from Muawiya bin Saleh (radhi Allah anhu), Tafseer Mazhari 1:31]

Sa’ib (radhi Allah anhu) bin Yazeed says that Rasulullah (salAllahu alayhi wasalam) recited Surah Al-Fatihah and blew it on me. To safeguard me against calamities, Rasulullah (salAllahu alayhi wasalam) recited this Surah and put his blessed saliva in my mouth.
[At-Tabraani narrated this tradition in 'Al-Awsat', Tafseer Mazhari 1:31]

Anas (radhi Allah anhu) said: “When you recite Surah Al-Fatihah and Surah Al-Ikhlas upon lying on your bed, you will be safeguarded and should become fearless of every thing except death.”[Narrated by Baraa', Tafseer Mazhari 1:31]

The Prophet said, 'Whoever mastered the first seven (chapters or verses) from the Qur'an is a pontiff'. [Hakim 1/564; Dhahabi]

The Prophet said, 'The mother of the Qur'an are the seven oft repeated verses'
[Bukhari 4704]


The Prophet said, 'In the Fatiha of the Qur'an, there is a cure for all maladies(illnesses)' [Darimi 3236, also narrated by Ad-Darmi in his Al-Masnad and Al-Bayhaqi in Shu’bul Imaan, Tafseer Mazhari 1:30]

Surah Al-Fatihah is equivalent to two thirds of the Qur'an[Al-Bayhaqi and Al-Haakim, Tafseer Mazhari 1:31]