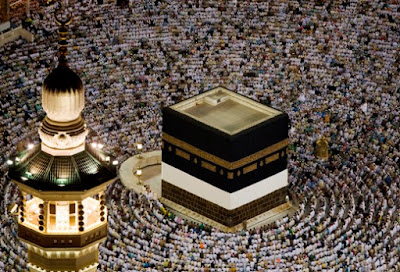 Sa’eed was sitting at the waiting area at the Jeddah airport after having completed the rites of hajj, and next to him was another person who completed his hajj.  The man next to him said: I work as a contractor and Allah (swt) has blessed me with performing my tenth hajj.

Sa’eed told him: hajj mabroor, may Allah accept and forgive you your sins. The man smiled and said: ameen. Then he asked him: have you performed hajj before this time?  Saeed was hesitating to tell him, and then he said: by Allah, it’s a long story and I don’t want to hurt your head with my talk.  The man laughed and said: please tell me, as you see we have nothing to do, we’re just waiting.


Sa’eed smile and said: yes, waiting is the start of my story. I’ve been waiting years so that I can go to hajj.  After working for thirty years as a physiotherapist in a private hospital, I was able to save enough money to go for hajj. The same day I went to get my salary, I came across one of the mother’s who’s paralyzed son I treat. I could see her face was worried and anxious. She said: I leave you to Allah’s keeping, brother Sa’eed this is our last visit to this hospital. I was surprised with her words and I thought she wasn’t happy with my treatment, and that she was considered moving her son to another hospital. She told me: no brother Sa’eed, Allah bears witness that you were to my son like a father, and you helped him in his treatment when we had lost hope. Then she left very saddened.·
The man next to him interrupted and said: that’s strange, if she was pleased with your treatment and her son was improving then why did she leave?  Sa’eed answered: that’s what I thought too, so I went to the administration to find out what happened. They told me the boy’s father had lost his job and was unable to continue paying for his son’s treatment.
The man next to him said: there is no might and power except with Allah, poor them, how did you deal with it?


Sa’eed said: I went to the manager and pleaded with him to continue treating the boy on the hospital’s expense, but he sharply rejected and said, ‘this is a private institution not a charity’.
I left his office sad and broken for this family. Then suddenly, I placed my hands in my pocked which had my money all prepared for hajj. I stood in my place for a while, then I raised my head above and spoke to my Rabb: O Allah, You know how I feel and You know there is nothing more beloved to me than to go to Your house and do hajj, and to visit Your messenger’s masjid. You know I have been working all my life for this moment, but I prefer this poor lady and her son over myself, so don’t deprive me of Your favors.
I went to the accounts desk and paid all I had for his treatment which covered the next six months. I begged the accountant to tell the lady that it’s from the hospital expense for special cases. He was affected by this and there were tears in his eyes and said, ‘baarak Allah feek and people like you’
The man next to him then said: if you donated all of your money, then how did you go to hajj?
Sa’eed said: I went back to my home sad that day for having lost the opportunity of a lifetime for hajj. But my heart was filled with happiness that I removed a distress from the lady and her son. I slept that night with a tear on my cheek. I had a dream and I was making tawaf around the ka’aba and people were saying salam to me and they told me: ‘hajj mabroor O Sa’eed, for you have performed hajj in the heavens before you performed hajj on earth’. I immediately woke up and felt an indescribable happiness. I praised Allah (swt) for everything and was pleased with His decree.


When I got up from my sleep, my phone rang and it was the hospital’s manager. He told me the owner of the hospital wants to go to hajj this year and he won’t go without his personal therapist. But his therapist’s wife is expecting and has reached her final days of pregnancy so he can’t leave her. Would you do me favor? Would you accompany him in his hajj?
I made sujood shukr to Allah (swt). And as you see, Allah (swt) granted me to go to His house without having to pay anything. And all praise to Allah, the owner of the hospital insisted on giving me something for his accompaniment. I told him the story of the lady and her son, and he demanded the boy be treated at the hospital from his own personal expense. And to place a donations box in the hospital for the treatment of needy patients. And on top of that, he gave the boy’s father a job at one of his companies. He even returned the money I had initially spent for the boy’s treatment. Have you seen great favors than the favours of my Rabb? Subhan Allah.
The man next to him hugged him and told him: by Allah I have never felt this kind of shyness as I’m feeling now. I would perform hajj one year after another thinking I was doing something great, and that my place with Allah would be elevated as a result of it. But now I understood that your hajj is equivalent to a thousand of mine. I went to the house of Allah, but Allah invited you to His house. May Allah accept your hajj.


Always think good about Allah (swt) and know He is able to do all things.


We ask Allah (swt) to open our hearts and to open the door of hajj for us. May He never deprive us of His great favours.  Aamiin.