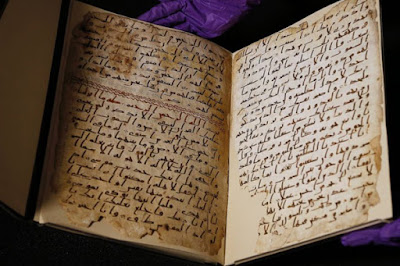 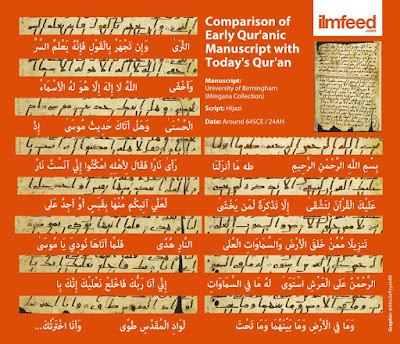 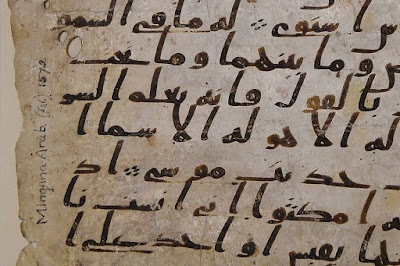 Here's a really informative graphic comparing the Qur'anic manuscript discovered at University of Birmingham, UK recently (carbon dated to 645 CE or 24 Hijri year) with the modern day Arabic writing of the Qur'an... and they're practically IDENTICAL !
And look at the section that has been preserved...


1. Ta, Ha.
2. We have not sent down to you the Qur’an that you be distressed
3. But only as a reminder for those who fear [Allah] –
4. A revelation from He who created the earth and highest heavens,
5. The Most Merciful Istawa (rose over) the Throne (in a manner that suits His Majesty).
6. To Him belongs what is in the heavens and what is on the earth and what is between them and what is under the soil.
7. And if you speak aloud – then indeed, He knows the secret and what is [even] more hidden.
8. Allah – there is no deity except Him. To Him belong the best names.
9. And has the story of Moses reached you? –
10. When he saw a fire and said to his family, “Stay here; indeed, I have perceived a fire; perhaps I can bring you a torch or find at the fire some guidance.”
11. And when he came to it, he was called, “O Moses,
12. Indeed, I am your Lord, so remove your sandals. Indeed, you are in the sacred valley of Tuwa.
13. And I have chosen you, so listen to what is revealed [to you].

Allahu akbar, of all pages of the Qur'an that deal with various topics this short section mentions several key matters...

Firstly, an affirmation that it is Allah (swt) who sent down the Qur'an. Whilst this is obvious to us as Muslims, the explicit mentioning of that fact has a huge impact because other alleged books of revelation do not contain such a statement.  The Qur'an is clear - it's from Allah, and it makes that assertion in a very clear bold manner.

Secondly, a reminder as to the Mercy of Allah in two senses, that Islam was not meant to be a source of distress, and an explicit declaration of this attribute as one of the names of Allah.

This is also a beautiful reminder to the not-yet-Muslims as to the names and attributes of Allah. Consider how others depict the nature of God... the atheists say he is cruel and unjust (na'u thubillah) for inflicting disease and famine, etc, upon the world. Christians claim him to have a son (na'u thubillah), or be mortal, or to have died, etc. Every other ideology, other than Islam, necessarily introduces some falsehood into the nature of God - and here it's all refuted! Allah (swt) is the Creator/Owner of all that exists, and He is the Most Merciful.

Thirdly, we have the introduction to the story of Musa (as) when he was about to be sent on his mission. Musa (as) is a figure that unites Jews, Christians and Muslims, thus his mention alone contradicts those who dare say that Islam is something completely different to what came before. No, here Allah makes it clear that Musa (as) is His messenger, we share the same stories... only the Islamic perspective is free from error.

Side note: in the Biblical version of this incident narrated (in Exodus 3), the family of Musa (as) is not mentioned, thus he's presumed to be alone. Yet the Qur'an makes clear he was with his family.

Of course, Musa (as) isn't the only Messenger that all three Abrahamic religions share - but he is the one who was the foreigner (an Israelite among the Egyptians) who was about to face up to an evil tyrant ruler who was persecuting the believers and treating them as slaves. See any parallels with modern-day?

Finally, we have a very encouraging famous story concerning Umar bin Khattab (ra) back at the time when he used to persecute Muslims - to the point where he'd beat a Muslim women to the point where he would get tired (and he was a big, strong, powerful guy)... imagine how much torture he'd have inflicted to reach that state.

The story (paraphrased in brief) is that Umar (ra) had been worked up to a point where he was intent on attacking/killing Rasool-Allah (saw), and began marching to find him. One of the companions who saw Umar in this state redirected him to look at his own family first if he had issues with Muslims, because his own sister had accepted Islam. He marched to her house, attacked her, and then through a moment of remorse agreed to read some of the Qur'an. He even agreed to take a ghusl first. And the part that he read? The beginning of Surah Taha... i.e. this section! Upon reading this, he marched straight to Rasool-Allah (saw) and accepted Islam.

And then, not three minutes later, encouraged the Muslims (who were keeping low-key at the time) to stand up and be recognised, at which point they then marched out into the main area of Makkah to announce themselves, having found strength in the courage of Umar (ra).

There are many parallels we could draw between this incident, and what is happening today. It was not long ago that Arnoud van Doorn from the Netherlands, who belonged to a right-wing political party headed by Geert Wilders which also made a filthy film against Islam, found himself researching Islam and eventually accepting it..

The point is, as bleak as things seem, we can never lose hope because those who have Allah, have everything they need for success.

May Allah (swt) make this a means of guidance for those who are sincere to the truth, and ease the situation for Muslims the world over, Ameen.