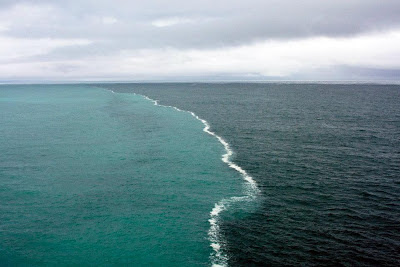 There is a place in the gulf of Alaska where two oceans meet but don’t mix. If you look at the photo below you will notice that indeed two different oceans (as seen by their different colors) are meeting each other but not mixing (hence the foam in the middle of the picture.)

A lot of you might find this to be quite shocking and your first conclusion is to call the picture a fake saying that it is Photoshopped. The fact of the matter is that the picture is 100% REAL.
Now, this begs the question: “why are these oceans meeting but not mixing? Surely there is a scientific explanation?”

The Truth About The Picture

A flickr user named kentsmith9 claims to be the person who took the photo claims that:
“he is confident that what you are seeing in the picture above is the result of glaciers being composed of fresh water, meanwhile the real ocean has a higher percentage of salt which causes the two bodies of water to have different densities and therefore makes it more difficult to mix which creates the foam.”

Quran is surely the words of Allah, The Glorified, The Exalted, The Wise. 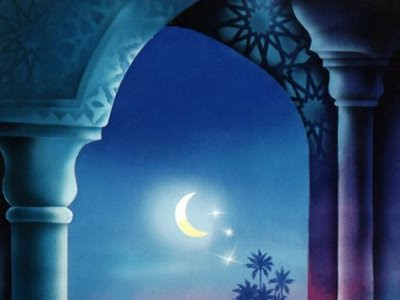 As the blessed month of Ramadan approaches, it is time to warm up and get ready. Reading the Prophet'shadiths about Ramadan and its blessings cleans the believers' souls and makes them more eager to enjoy the exceptionally spiritual, soul-nourishing experience of Ramadan.
Following is a collection of hadithsthat reveal the status of the blessed month, its merits, rewards and special offers, as well as the Prophet's example in Ramadan.

·         Abu Hurayrah (may Allah be pleased with him) reported that the Prophet (peace and blessings be upon him) said:
When Ramadan enters, the gates of Paradise are opened, the gates of Hellfire are closed and the devils are chained. (Al-Bukhari and Muslim)

·         (The performance of) `Umrah during Ramadan is equal (in reward) to performing Hajj with me. (Authenticated by Al-Albani) Umm Saleem (may Allah be pleased with her)
·         Abu Hurayrah reported that the Messenger of Allah (peace and blessings be upon him) said:
Every action a son of Adam does shall be multiplied—a good action by ten times its value, up to 700 times. Allah says: With the exception of fasting, which belongs to Me, and I reward it accordingly. For, one abandons his desire and food for My sake.
There are two occasions of joy for a fasting person: one when he breaks his fast, and the other when he meets his Lord, and the (bad) breath (of a fasting person) is better in the sight of Allah than the fragrance of musk.(Al-Bukhari)
·         Abu Ayub (may Allah be pleased with him) reported that the Prophet (peace and blessings be upon him) said,
Whosoever fasts in Ramadan and then follows it with fasting six days of Shawwal, it is as if he fasts forever. (Muslim)

Abu Hurayrah reported that the Prophet (peace and blessings be upon him) said, Fasting is a shield; so when one of you is fasting he should neither indulge in obscene language nor should he raise his voice in anger. If someone attacks him or insults him, let him say: "I am fasting!" (Muslim)

·         Abu Hurayrah reported that the Prophet (peace and blessings be upon him) said,
The five (daily) prayers, and from one Friday prayer to the next, and from Ramadan to Ramadan are expiation for sins committed in between provided one stays away from the major sins. (Al-Bukhari)

·         Ibn `Abbas (may Allah be pleased with him) narrated:
“The Prophet was the most generous of all people, and he used to become more generous in Ramadan when Gabriel met him. Gabriel used to meet him every night during Ramadan to revise the Qur'an with him. Allah's Messenger then used to be more generous than the fast wind.” (Al-Bukhari)
·         `A'ishah (May Allah be pleased with her) reported:
The Messenger of Allah (peace and blessings be upon him) used to strive more in worship during Ramadan than he strove in any other time of the year; and he would devote himself more (in the worship of Allah) in the last ten nights of Ramadan than he did in earlier part of the month. (Muslim).
·         Abu Hurayrah (May Allah be pleased with him) reported:
The Prophet (peace and blessings be upon him) used to observe i`tikaf (spiritual retreat in a mosque) every Ramadan for ten days; in the year in which he passed away, he observed i`tikaf  for twenty days. (Al-Bukhari)
by Muhammad Fathi (OnIslam)
--- 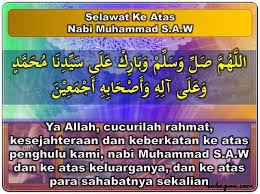