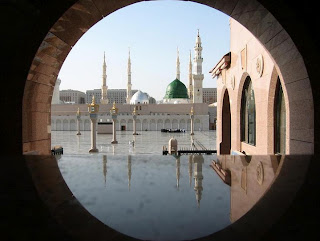 "The best among you are those who have the best manners and character."
("Inna min akh-yarikum ahsanukum khuluqa")
Reporter: Hadhrat Abdullah ibn Amr (r), Source: Sahih al-Bukhari, Vol. 8: 56b

Righteousness is good character, and sin is that which wavers in your heart and which you do not want people to know about. - [Sahih Muslim]

Messenger of Allah s.a.w said: There are three signs of a hypocrite: when he speaks he speaks lies, when he makes a promise he breaks it, and when he is trusted he betrays his trust. (Sahih Bukhari)


“Whoever believes in Allah and the Day of Judgment should speak what is good or keep silent.” (Sahih al-Bukhari, Sahih al-Muslim)


Rasul Allah (sal Allahu alaihi wa sallam) said: “Give due respect and regard to your children and decorate them with the best of manners.” [Abu Daud]

Abu Huraira, r.a., said that the Prophet of Allah, s.a.w, said, "If one has good manners, one may attain the same level of merit as those who spend their nights in prayer."(Hadith - Bukhari's Book of Manners no. 285, Hakim, and Abu Dawud)

“Whoever has an atoms worth of kibr (pride) in his heart will not enter Paradise.” ~ Prophet Muhammad s.a.w [Sahih Muslim]


Prophet Muhammad (s.a.w) said: “Be kind, for whenever kindness becomes part of something, it beautifies it. Whenever it is taken from something, it leaves it tarnished." [Imam Bukhari’s Book of Muslim Manners]