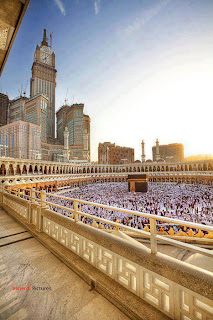 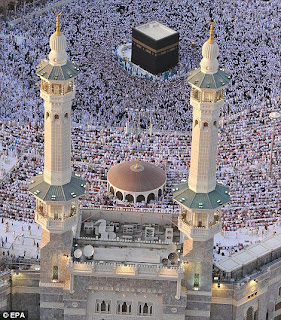 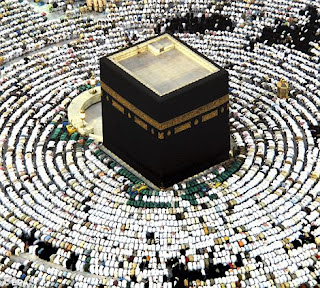 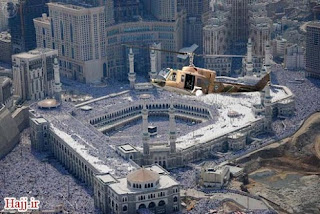 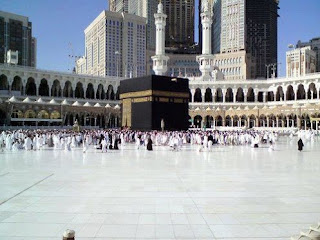 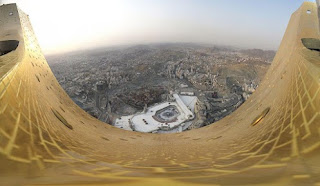 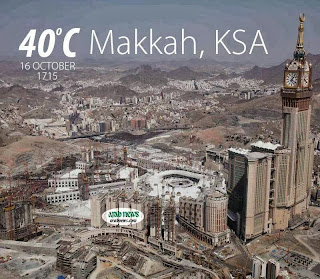 Email ThisBlogThis!Share to TwitterShare to FacebookShare to Pinterest
Labels: Makkah

Some Important Dates in the Life of the Prophet Muhammad (SAW) 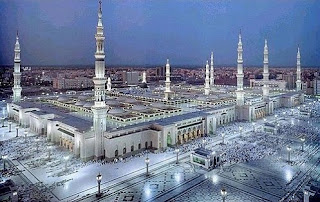 
Birth of Prophet Muhammad (SAW) at Makkah in Arabia;
his father , Abdullah bin Abdul Muttalib, belonging to the highly-respected clan of Hashim, died a few months before his son's birth. His loving mother, Amina took care of her son.

582 A.D.
Uncle Abu Talib took his young and dutiful nephew on a trading mission to Syria where, at Bostra, a wellknown Christian Monk, Bahira, discerned in the young Muhammad (SAW) the signs of God's prophethood.

595 A.D.
Well-versed in commerce, Muhammad (SAW) led a trading mission to Syria on behalf of a noble widow of Makkah, Khadijah. It was very profitable and Khadijah was highly impressed by his honesty, integrity of character and his good manners. They were married; He was 25.

605 A.D.
Muhammad's(SAW) honesty became a byword in Makkah and the Makkans honoured him with the title of "Amin" (Trustee or the Trusted One). He showed remarkable tact in amicably settling a tribal row over the installation of the celestial Black Stone in the renovated holy Kaaba in Makkah.

610 A.D.
In the Cave of Hira near Makkah, where Prophet Muhammad (SAW) often went for meditation, the Angel Gabriel visited him and told him that he was chosen to be God's Prophet and he conveyed to him the word of God. Thus began his Prophetic Mission and the revelation of the Holy Quran unto him.

613 A.D.
In a sermon at Mount Safa, Prophet Muhammad (SAW) publicly preached the Word of God, urged the Makkans to give up the worship of idols, to join the fold of Islam and to worship the one and only God. This alarmed Makkah's pagan rulers and they started persecuting Prophet Muhammad(SAW) and his Muslim followers.

615 A.D.
Due to persecution, Prophet Muhammad(SAW) gave permission to a group of muslims in Makkah to emigrate to Christian-ruled Abyssinia where the noble Negus gave them asylum. In desperation, Makkah's pagan rulers issued an edict inposing social and economic boycott of the Prophet.

620 A.D.
The death of his dear Uncle Abu Talib and of his beloved wife, khadijah, in the same year was a double tragedy for the Prophet.

621 A.D.
The Prophet's journey to the Heavens (Miraj or Ancension) gave him fresh inspiration and the courage of heart to continue the Prophetic Mission in the service of God and Islam.

622 A.D.
With divine consent, Prophet Muhammad (SAW), along with a band of his Muslim followers, emigrated to Madina on the invitation of its wise elders who acknowledged him as the Prophet of God. He built a Mosque in Madina. This was also the beginning of the Islamic Hijra Calender. The first Islamic State was established by him in Madina.

623 A.D.
Muslims were instructed by the Prophet to turn towards the Kaaba in Makkah during their Prayer instead of Jerusalem (Baitul Maqdis) as was the practice heretofore. The Prophet gave the Covenant of Madina to govern the relations between the Islamic State and its inhabitants, between the State and its non-Muslim citizens and the rights and duties of the citizens and the State.

624 A.D.
The Battle of Badr in which the Prophet of Islam and his Muslim followers defeated the enemy forces from pagan Makkah.

625 A.D.
The Battle of Uhud in which the Makkan troops inflicted some losses on Madina's Muslim defenders who fought back bravely and forced the enemy to retreat to Makkah.

627 A.D.
The Battle of the Trenches, in which a line of trenches, dug by Madina's Muslim defenders under the Prophet's leadership, forced a large enemy force from Makkah to retreat.

628 A.D.
Prophet Muhammad (SAW) signed the Peace Treaty of Hudaibya with Makkah's emissaries under which Muslims were, inter alia, alowed to go to the Kaaba for the annual pilgrimage in restricted numbers. Muslims won the battle of Khaybar in the same year. Prophet Muhammad (SAW) wrote to the heads of many States to enter the fold of Islam.

630 A.D.
Conquest of pagan-ruled Makkah by the Army of Islam under Prophet Muhammad's (SAW) command; amnesty and magnanimity to the defeated Makkans; smashing of the 360 idols in the Kaaba by the Prophet and his companions. Triumph of Islam: Military encounters at Mutah, Hunain, Taif and Tabuk in defence of Islam and the Islamic State of Madina.

631 A.D.
First large Muslim group from Madina went to Makkah for Haj pilgrimage at the Kaaba.

632 A.D.
Prophet Muhammad's (SAW) last Haj pilgrimage at the Kaaba and his historic sermon on Mount Arafat on the outskirts of Makkah.

June, 632 A.D.
The passing of Prophet Muhammad (SAW) at the age of 63; burial in Madina; the commencement of the Caliphate of his close companion, Abu Bakr as the spiritual and temporal head of the Islamic State.