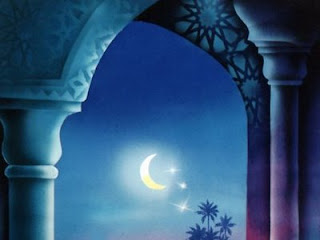 Narrated by Abu Said: I heard the Prophet (peace be upon him) saying, "Indeed, anyone who fasts for one day for Allah's pleasure, Allah will keep his face away from the (Hell) fire for (a distance covered by a journey of) seventy years." [Bukhari Hadith 93 Volume 4, Book 52]

Abu Huraira related that the Prophet said: Allah the Majestic and Exalted said: "Every deed of man will receive ten to 700 times reward, except Siyam (fasting), for it is for Me and I shall reward it (as I like). There are two occasions of joy for one who fasts: one when he breaks the fast and the other when he will meet his Lord" (Muslim).

Narrated by Abu Said: I heard the Prophet (peace be upon him) saying, "Indeed, anyone who fasts for one day for Allah's pleasure, Allah will keep his face away from the (Hell) fire for (a distance covered by a journey of) seventy years." [Bukhari Hadith 93 Volume 4, Book 52]


Abu Hurayrah r.a. narrated that Prophet Muhammad s.a.w said: "Ramadan, a blessed month, has come to you during which Allah has made it obligatory for you to fast. In it the gates of Heaven are opened, the gates of al-Jahim are locked, and the rebellious devils are chained. In it Allah has a night which is better than a thousand months. He who is deprived of its good has indeed suffered deprivation." (Hadith - Al-Tirmidhi)


“There is a gate in Paradise called Ar-Raiyan, and those who observe fasts will enter through it on the Day of Resurrection"[Sahih Bukhari]


Prophet Muhammad (s.a.w) said: “Fasting is a shield; it will protect you from the hellfire and prevent you from sins.” (Sahih Bukhari Vol. 3)

Abu Huraira related that Rasulullah said: If anyone omits his fast even for one day in Ramadan without a concession or without being ill, then if he were to fast for the rest of his life he could not make up for it (Bukhari)

Whoever observes the Ramadan fast and follows it with six days of fast in Shawwal, it is as if he has fasted Dahr (the whole year)." [Bukhari]

Abu Umaamah R.A.A. said:
I said: 'O Messenger of Allah (saw), tell me of an action by which I may enter Paradise'. He said: 'Take to Fasting, there is nothing like it.' - [Imam Nasai’, Ibn Hibbaan, Al-Haakim, Saheeh]


When to start fasting:

Ibn Umar related that the Prophet s.a.w said: "Do not start fasting unless you see the new moon, and do not end fasting until you see it. If the weather is cloudy then calculate when it should appear." (Bukhari, Muslim)

The Suhoor meal (which is eaten before dawn):

Anas related that Rasulullah s.a.w said: Take the Suhoor meal, for there is blessing in it (Bukhari, Muslim)

Breaking your fast:
Salman ibn Amir Dhabi r.a related that the Prophet s.a.w said: Break your fast with dates, or else with water, for it is pure (Abu Dawud, Tirmidhi)

Fasting during a journey:
Aisha r.a related that Rasulullah s.a.w was asked whether one should fast when on a journey, and he replied: Fast if you like, or postpone it if you like (Bukhari, Muslim)

Behaviour while fasting:
Abu Hurairah r.a related that the Prophet s.a.w said: "If a person does not avoid false talk and false conduct during Siyam (fasting), then Allah does not care if he abstains from food and drink." (Bukhari, Muslim)


Forgetfully eating or drinking while fasting:
Abu Hurairah r.a related that Rasulullah s.a.w said: If anyone forgets that he is fasting and eats or drinks he should complete his Siyam, for it is Allah who has fed him and given him drink (Bukhari, Muslim)


Providing for those who are breaking the fast:
Zaid ibn Khalid Juhni r.a related that the Prophet s.a.w said: "He who provides for the breaking of the Siyam (fasting) of another person earns the same merit as the one who was observing Siyam (fasting) without diminishing in any way the reward of the latter." (Tirmidhi)


Lailat al-Qadr:
Aisha r.a related that the Prophet s.a.w said: "Look for Lailat al-Qadr on an odd-numbered night during the last ten nights of Ramadan." (Bukhari)

Ibn ‘Abbaas said: “The Messenger of Allah (peace and blessings of Allaah be upon him) made zakat al-fitr obligatory as a means of purifying the fasting person from idle talk and foul language, and to feed the poor. Whoever pays it before the (Eid) prayer, it is an accepted zakat, and whoever pays it after the (Eid) prayer, it is just a kind of charity (sadaqah).” (Reported by Abu Dawood, 1371. Al-Nawawi said: Abu Dawood reported it from Ibn ‘Abbaas with a hasan isnaad).
---
Consultant-Speaker-Motivator: www.ahmad-sanusi-husain.com
Alfalah Consulting - Kuala Lumpur : www.alfalahconsulting.com
Islamic Investment Malaysia: www.islamic-invest-malaysia.com
Posted by Editor at 07:42