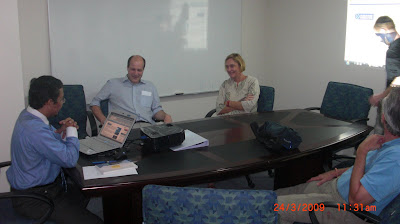 Today I was interviewed by ARD German Television on the development of Islamic finance in Malaysia and the world. The station is doing a story on Islamic Banking for a programme called Weltspiegel (mirror of the world). It’s a reknown tv-magazine in Germany featuring topics and stories from abroad for the German audience. ARD is the biggest network in Germany and comparable to BBC in UK.

Thanks ARD (particularly Mr Phillipp Abresch, Niki and the team) for giving me the opportunity to explain about Islamic finance to German audience.
Posted by Editor at 18:08