The Genocide Goes On - Gaza Needs Your Help NOW! 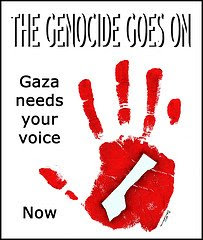 The world must act now to stop the war of terror, impoverishment and humiliation waged by Israel against the people of Gaza.
Gaza need your voice now....Gaza need your help now!

When the world ask for ceasefire:

The Palestinians say YES, THANKS!
But the Israelis say NO, TANKS!

and the Israeli tanks rumble on and keep shooting at civilian targets like terrorists from hell.
Are you still wondering who are the real terrorists? and who sponsor these terrorists?

A little boy shot in the head
Just another kid sent out to get some bread
Not the first murder nor the last
Again and again a repetition of the past
Since the very first day same story
Young ones, old ones, some glory
How can it be, has the whole world turned blind?
Posted by Editor at 11:31