31 March 2008 - Delivered a Lecture on Syariah-based Investment in Muar, Johor

Today I delivered a lecture on Syariah-based investment (Islamic unit trusts etc) in the historical town of Muar, located in the southern state of Johor. I was invited to speak on the topic by the country's top fund management company.

I noticed that about 50% of the crowd are non-Muslims. Some of the partipants drove from Kuala Lumpur (some 200 km away) to listen to my talk.

At the end of the talk, I got an invitation to speak at a university in Johor.
Posted by Editor at 23:53 No comments: 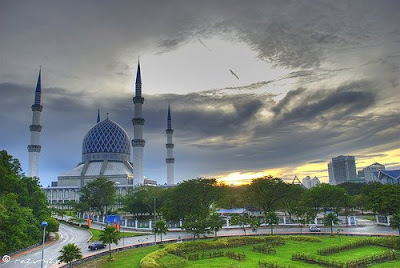 Today I delivered a lecture entitled "Developing Excellent Talent for Islamic Finance Industry" at a Seminar organised by Universiti Teknologi Mara (UiTM) in Shah Alam. I addressed the issue of lack of talent pool for Islamic finance industry and the steps to overcome this problem. What are competencies required to be an excellent Islamic banker etc. 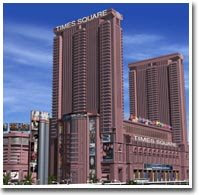 Join our future events on Islamic finance: "Seminar on Shariah & Legal Aspects of Islamic Banking & Finance" in April and "The 2nd Global Islamic Finance Conference (GIFC2008)" in June. The Minister of Finance, Malaysia will be invited to deliver the Keynote Address. GIFC will be our biggest conference of the year, InsyaAllah. Sponsorship for the event is very much welcomed.
Welcome to Kuala Lumpur...the centre of excellence.
Posted by Editor at 23:18 No comments: 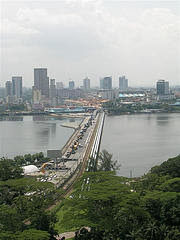 Inter-state lectures..... Delivered a lecture on Islamic finance in Kuala Lumpur during the day and drive down south to Johor Bahru "the Southern Gateway" on a 350km journey (3 hr 30 m drive)....then delivered another 2 hr-lecture on Islamic investment at night to a big crowd.
Since it is election time in Malaysia (8 March 2008)...some people asked me if I'm on an election campaign trail...going here and there....(No! not interested to be a politician at all).
Seen in the picture above is Johor-Singapore Causeway. The Johor-Singapore Causeway was completed in 1923 after four years of construction. The Johor-Singapore Causeway is the first land link between Peninsular Malaysia and Singapore. The second, called the Malaysia-Singapore Second Link, was completed in 1998.

Southern joke:
Someone told me that Singaporean authority is searching for Mas Selamat, the escaped detainee all over Johor Bahru because they notice billboards everywhere with the words "Selamat Datang"....actually Selamat Datang means welcome in Malay and nothing to do with welcoming Mas Selamat.
Posted by Editor at 21:32 No comments: